Today was very eventful, to say the least. But first, let me start with some observations I’ve made thus far.

OK, so I’ve been seeing quite a lot of mopeds and smart cars everywhere. They are amazingly common here and I’m not sure why they aren’t more common in the US. And they’re so cute, too! Also, gas is so much cheaper here than in the US! It’s about $1.50 a gal!!!! That’s half price!!! I think it’s crazy. And what’s with Spanish men being so effeminate? I mean, guys shouldn’t wear shorts that are so long and so sparkly. It’s just strange seeing a pretty macho-looking man wearing jewels on his shirt. Finally, Madrid doesn’t have any tabloids as we know them, but their television is even crappier that that in the  US. Hard hitting news equals some prostitute dressed like Marilyn Monroe who thinks her legs are the best part of her body and is willing to show her panties to all of Spain! Am I ranting? I should stop. I have to say, though, that it eludes me why a 62 year old woman (Maripaz) would be willing to have this “news” on while eating breakfast.

So that’s that. On to what we did all day.

First we went site seeing around Madrid. One of the more interesting places was the national bank. I just thought that their security system was quite unique. They store all of the money, etc. in the basement and if anyone tries to rob it, the basement fills with water, drowning the thieves.  Also, if there’s ever a natural disaster, the bank is self contained. It’s got it’s own water and electricity supplies, so it wouldn’t be effected.

The Prado was pretty nice too.  It’s apparently the Spanish equivalent of the French Louvre (which we will be seeing).  I saw some paintings that I recognized.

Both of these are by Diego Valazquez and caught my attention for one reason or another. It’s strange that a painting of the crucifix would impress me, given that I’ve seen it so many times after going to Catholic school all of my life, but something about it is unique.

[My sister] found an artist she really liked too: Francisco de Goya. This was her favorite of his early work. She liked how soft the faces are depicted.  It turns out he had a dark period too. It’s very gory and gruesome. The example I gave is much more palatable. Needless to say, [my sister] didn’t like those paintings! I wonder what woman caused him to be so depressed and what she did, because you know it wasn’t a soccer match that caused that depression! 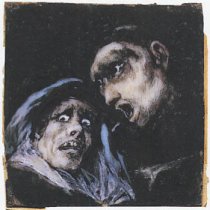 The Main office for mail, etc. was pretty impressive too. Mom doesn’t like it when I call it the post office, like I did in all my pics of it. But, that’s what it amounts to, as I understand it.  I can’t imagine what it would be like to work in such an impressive building everyday. My office building is nothing compared to it! Well, it actually isn’t very pretty at all, so there’s no comparison, but still.

So we rode the bus around (which are all red or blue btw) and eventually we met up with Cara. Cara is my mom´s friend Beth´s sister and married a Spaniard. They live in El Escorial with their two sons [who are] (4) and (6 months) [old].  Well, on our way to their beautiful and spacious house, my mother got very sick. We were stuck at a BP for quite a while, not sure exactly, though. All I know is that she stayed in the bathroom for a long time and [my sister] couldn’t bare to look  at mom without feeling sick herself. And I had to deal with both of them. Well, mostly [my sister]. Cara did an amazing job of staying calm and caring for mom.  While I was watching [my sister], I couldn’t help but think I was still in the US. I mean, BP around the world must all be identical. And the fact that the workers were darker than me were no indication of my location. I almost started talking in English with them, which was a bit embarrassing, but they couldn’t tell, so all’s good. Anyway, mom’s fine now, and we eventually got up to their home in the mountains.  Cara was quite the hostess and got us all set up in our rooms and invited us to swim in their pool. It was a bit cool (it was sort of late), but [my sister] and I agreed.  I didn’t end up swimming, but just laid out instead. I’ve always preferred warmth over being frozen..hah After that, we had fondue! It took a while to start, but it was delicious nonetheless!

So, after our little snack, [my sister] and I went to the room we shared and she finally finished HP #7!! She says that it was a perfect ending, which is good, because then the movie might have a chance of being good, unlike the last one that came out. Oh, and my black eye is fading!!!! Yay!!!!! You might be able to tell in some of the pics. [Background: I had gotten a black eye during the spring indoor soccer season.]

And I nearly forgot, Maripaz got me a Real Madrid scarf!!! How cool, right??!!?!! For those of you who know little to nothing about soccer, Real Madrid is one of the premier soccer clubs in the world. Most of you probably recognize the names Zinedine Zidane and David Beckham. Well, they (used to) both play for Real Madrid. Well, I also like the gift because I’ll be in Pittsburgh, where it’s cold most of the time, and will be able to use it often. I like when things are practical. It’s nice. Yes. I’m going to bed now….